The Best (and Worst) Stoner Cereals

Carl's Jr. to Launch CBD-Infused Burger in Denver Location This 420

Inside The Canna Kitchen: The United Kingdom's First CBD-Infused Restaurant

An American’s Quest to Find Fourth Meal in Canada

The Best (and Worst) Stoner Candy of All Time Is there anything more definitive of the munchies than a big bowl of cereal? We honestly don’t think so. It’s a perfect food, no matter the time of day. We think it’s high time we look around at the world of cereal and see just what’s going on. Best Cereal in the History of Cereals: Cinnamon Toast Crunch

As you chomp down a spoonful of Cinnamon Toast Crunch, a river of sensations flow, dreamlike, across your palate: The delicate, yet precise balance of cinnamon and sugar; the flawless crunch of the toasted wheat and rice; the cold sensation of milk blended with a dash of nostalgia. Memories are triggered from a simpler time — after little league, or after school, or after 15 blunts. Every aspect of General Mills’ masterpiece combines to create a harmonious union of flavor, elevating you from the blandness of your normal life to a place far away from worries, strife, and away from trouble. The taste takes you up to the heavens, to the great beyond, towards light, to the edge of time and space, and into dimensions untold.

That’s what a bite of Cinnamon Toast Crunch is like. Reese’s Puffs, by all means, is cheating. Not sure how they got away with simply combining Cocoa Puffs and Peanut Butter Crunch, but they’ve done it — and they’ve done it well. Peanut butter and chocolate is a time-tested combo, and just like Reese’s candy, the cereal is nothing short of a grand slam. Not Much Different than Eating Razor Blades: Cap’n Crunch

Cap’n Crunch is straight up painful. With every bite, you’re declaring war on the roof of your mouth. What’s the deal, Cap? Why does your cereal gotta be so dangerous? Surely there must be a way to retain the flavor without feeling like you’re eating a bowl of ninja throwing stars. Dig’em is about as chill as it gets. He’s named after the way he feels about the very cereal he promotes. I have no choice but to assume Dig’em spent years trying to promote other cereals, but never really felt, in his heart, that they were the ones. But then Sugar Smacks came along (they’re called Honey Smacks now, for some reason) and Dig’em dug ‘em.

Oh, by the way, please don’t eat them right now. Unless you feel like getting salmonella. What a true nightmare Crazy Craving is. The thing is fully rabid, and capable only of screaming, “ME WANT HONEYCOMB”. It’s like they managed to make Donie from The Wild Thornberrys even worse. Get Crazy Craving out of here, please. The point is: Chris is Honey Nut Cheerios, and Liam is regular Cheerios. One is flawless, and one isn’t. I’m sorry. This is the way it is. Froot Loops have been hiding two things from us for a very, very long time. For starters, fruit is spelled “froot”, which is despicable. Second, every single loop of froot that you eat is the exact same flavor. Very sneaky, Froot Loops. Very. Sneaky. If you make a food that contains raisins, and the raisins are the best part of the food, then guess what? I’m sorry, but you have made a bad food. To this day, I still have no idea how this went so wrong. Oreos are incredible. Oreos dipped in Milk are double incredible. Oreo O’s — which contains an incorrect usage of an apostrophe — are dirty water trash, because they taste nothing like Oreos. Why did they remove the cream filling aspect in favor of tiny little cream filling-flavored marshmallow flecks? Whose idea was that? They should be sent to jail. Honey Bunches of Oats doesn’t really offer much in the way of an appealing name, but they more than make up for it with flavor. Do yourself a favor and slice up some fresh strawberries for your next bowl; it’s the stuff dreams are made of. That’s right. I said it. Lucky Charms are gross and it’s time we all admitted it. Maybe Lucky hypnotized everybody, because I legitimately don’t understand what there is to love about this cereal. Those soggy little marshmallows that taste like a stale version of meringue? Those flavorless bits of toasted oat that show up at a 75/25 ratio? The disgusting marshmallow milk that remains at the end? No thanks to all of that. Why isn’t Krave more popular? Originally launched in Israel as “Kariot”, Krave is a chocolate-filled cereal that never feels too overwhelming or rich. And if you’re one of those freaks who refuses to put milk in your cereal, Krave still tastes great without it. Alpha Bits are fun, and if you don’t think so you’re a narc. You can write your name, spell out all kinds of hilarious curse words, and a million other things. Just keep your energy light, or you might start thinking about Hi Dad Soup from A Goofy Movie, and oh no, oh no no no no, ugh, great, now I’m crying. Cookie Crisp seems to have taken a page from the Oreo handbook, because once again, I don’t know where this went wrong. A bunch of chocolate chip cookies in a big bowl of milk sounds like a sure-fire hit, right? Then why is Cookie Crisp so spectacularly missing the mark? You’re better off just putting a bunch of those Trader Joe’s chocolate chip cookies into a big bowl and pouring some milk over the top. Might as Well be a Basket of Sticks: Shredded Wheat

Shredded Wheat should not be consumed by a human being. Breakfast cereal is supposed to make us feel like a bunch of little kids eating sugar, not like a bunch of cattle grazing on raw wheat. Hey, every single cereal company ever, have fun coming up with a better slogan than “He’s big! He’s green! He’s just in time for breakfast!”

That’s about as good as it gets.

In this article:featured, munchies 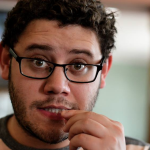